'The wood that built New Zealand'

It has been said the wood from the King Country built New Zealand. Before humans arrived, more than 80% of New Zealand was covered in trees. The extensive old forests of New Zealand provided the timber trade with enough resources to establish it as a major pioneering industry. Lisa McLean tells us more...

The first Europeans to visit New Zealand in the late 1700s found that Kauri timber was ideal for shipbuilding and other construction. Logging began, and by the mid-1800s sawmilling was a big industry. Large amounts of Kauri gum were dug from Northland’s swamps and sold overseas, for use in varnish and linoleum. Because the wood floated, logs were carved out to make Waka (canoes). A 1911 report in the New Zealand Herald described the power of the Kauri dam -

“Telegram from Dargaville: The fresh [sudden flood] that occurred after Tuesday’s rain has liberated great numbers of logs, and the various mills now have large stocks on which to work. In the Awakino Creek 5000 logs were poled out to the booms … in the Tangowahine 2000 are now available for the rafting steamers, and in the Mangonui there are over 2000 on the move”

To further solve the problem of getting logs up to 20 meters long and weighing up to 10 tons from bush to mill,  bush tramways quickly caught on in New Zealand, where the earliest date from the 1850s. An 1877 report by an overseas forester stated,

"The universal use of the tramway forms a marked feature of the treatment of New Zealand forests. I have seen them of all descriptions and no saw miller ever dreams of working a forest without one.”

Around 1000 bush tramways from 3 - 30 km long once operated throughout the country. Bush tramways were an extreme form of railway, with makeshift brakes, steep grades, even steeper inclines, tight curves, rickety viaducts, and little maintenance. Although hidden in the back- blocks, the tramways fascinated people for their daring engineering, scenic settings, and intriguing machinery. 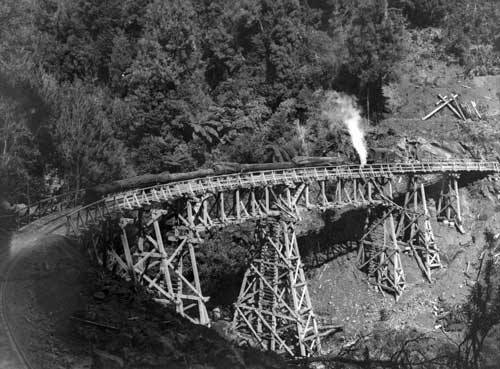 ABOVE: In steep country, large wooden viaducts were sometimes needed to support bush tramways. Among the more remarkable was the Mangatukutuku Viaduct in the King Country. It was some 30 meters high and allowed trams to haul logs to the mill at Ōngarue. Source: http://www.archives.govt.nz

It is estimated that around 1,000 tramways were built, with a total length of around 5,000 kilometers – almost as long as the public railway system at its peak.

Most 19th-century bush tramways were laid with wooden rails and worked by teams of up to eight strong horses. In charge was the “ trammy”, reigns were not needed – the trammy relied entirely on verbal commands, and was helped by the front horse. Some larger mills stabled up to 40 horses, highly valued, they were well cared for, being shod, groomed, housed in stables and adequately fed.

Gangs of bushmen felled trees using axes and two-man crosscut saws. On the abandoned Stratford - Okahukura line, Forgotten World Adventures travels through Tokirima, the name  translates as five (rima) adzes (Toki) as Tokirima was an ideal place to fell and carve Kauri into Waka to be floated down the Ohura river. Usually trees were cut singly, but a skilled bushman could fell several at a time in a ‘drive’. He did this by chopping scarfs (wedges) in a line of trees up a hill, and then felling the highest tree, which took down the others like a row of dominoes.

Once the logs had been sawn at the mill, the task became easier. The volume of wood was reduced by over a third, and sawn timber could be stacked. But transport accounted for as much as half of the cost of timber production.

Towns grew up around the back-country sawmills. Often they were temporary, without piped water, sewers or sealed roads. Once the nearby bush had been cut, the town simply vanished.

Taumarunui became a regional sawmilling hub after the railway reached the town in 1903, and the industry developed further once the entire line was completed in 1908. Townships such as Mangapēhi and Ōngarue were bustling places when the mills were operating. Sawmilling provided a livelihood for many King Country residents where the sounds and smells of the mills were a distinctive part of everyday life.

Unlike most other bush tram routes, much of the Ōngarue tram system in the King Country survives unmodified, making it a nationally significant site which represents an important part of the timber industry.  The Ellis & Burnand operation at Ōngarue was a major Central North Island timber industry operation in both scale and longevity. They were one of the largest native timber companies in the country, and almost certainly the leading producer of Rimu timber.

By the early 20th century, most forest on accessible flat land had been logged. Bush tramways had to reach into hilly country beyond, and became longer and steeper. New Zealand’s economy was booming, and larger sawmills were built. Horse teams had a top speed of only 6 kilometers per hour. Steam locomotives, steel rails and eventually rail tractors spelled their end. The last horse-drawn bush tram stopped operating in 1938.  In 1991 the National Environmental Standards (NES) were established to protect our Forests from potential environmental effects. Today New Zealand operates under the core plantation forestry activities of the NES to encourage and sustain our rich natural landscape and to strike a balance between industry and environment.